Two blue balloons and one yellow

Pinkie Pie is a pink earth pony mare who resides in Ponyville, where she is very well known as a happy, positive pony who likes to make ponies smile and often throws parties. Pinkie is quite random, and will often to strange things that don't make sense to anypony except herself (although, sometimes she admittedly doesn't even understand herself). She has also been known to occasionally break both the 4th wall and the fundamental laws of physics. Pinkie currently lives in a room above Sugarcube Corner, which is also her place of employment. This allows her to not only make tasty treats for everypony, but also gives her plenty of opportunities to snack on all sorts of sweets, herself. She is also a very active prankster, along with Rainbow Dash. Pinkie Pie also embodies one of the Elements of Harmony, the Element of Laughter.

Pinkie Pie is a fun loving, highly extroverted, silly pony. She loves to meet new ponies, and often serves as a "welcome pony" for new arrivals into Ponyville. Her greatest passion making ponies smile, grin, and laugh. She will go out of her way to help turn any frown upsidedown. She is helpful in other ways as well, wherever she can be. Pinkie is very positive and upbeat, and almost always has a smile on her face. She loves to play games, pull pranks, cook sweets, eat sweets, surprise ponies, throw parties, and do other random, fun things.

Pinkie Pie was raised on a Rock Farm with her family, including her parents and her sisters, Blinkie Pie and Inkie Pie. She had not experienced fun at all until Rainbow Dash's Sonic Rainboom gave her the most joy she had ever had. She immediately wanted to share this joy with everypony, but because she knew that such happy phenomena occur very rarely, she decided to start throwing parties and making sweets to make ponies smile. She has since become quite skilled at these activities. At some point, she changed residence to Ponyville, where she has been making ponies happy ever since. 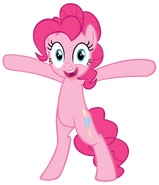 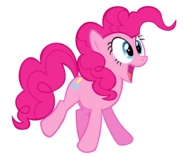 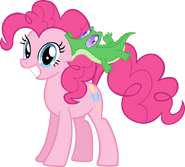 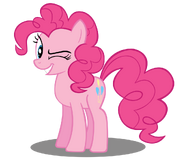 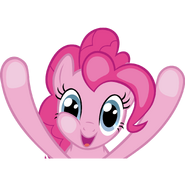 Retrieved from "https://twitterponies.fandom.com/wiki/Pinkie_Pie?oldid=40073"
Community content is available under CC-BY-SA unless otherwise noted.